Hello
On Saturday 29th May 2010 I will be supporting the incredible improvised avant-rock supergroup Rangda. Rangda is made up of Six Organs of Admittance mastermind Ben Chasny, Sun City Girls O.G. Sir Richard Bishop, and drummer Chris Corsano, who has worked with Björk.
The gig will take place on Saturday 29th May at Miss Peapods, Penryn, Cornwall.
I shall be performing a set of my songs, playing piano/organ, ukulele and xylophone. I will be accompanied by Nick Duffy on bass and banjo, Nish White on cello and Jamie Matthews on guitar and backing vocals.
See you there!

Beach Nourishment is a radio show’ hosted by Patrick Simons, a local sound artist. The show airs music and sound pieces that are by nature challenging, esoteric, conceptual, interesting- “music that one has to invest & engage with on a different level to the veritable muzak that is pumped into our conciousness via the commercial stations. A kind of ‘deep listening’ antidote to the ‘polished turd’ poison of ‘pirate fm’! “

Last Wednesday Orpheus’ Baubles presenter Simon Drinkwater took over the Beach Nourishment show for an April Fools evening and brought together 4 local artists, Minko, Simon Drinkwater, Dom Allen and Tim Crowley, to make some live performances on air. Crammed into a tiny studio with an array of instruments, ranging from harp and xylophone, rigged up with delay pedals, to glitchy analogue sound machines and a computer programme that runs real-time chance based sound algorithms and creates music randomly from what it picks up from its inbuillt speaker, we each had 10 minutes to experiment. We all did separate pieces but at the end we improvised with myself on xylophone, Simon on harp and Tims randon computer machine. I have included to download one of my pieces here – a vocal piece built up with a looper (Church Secrets), and the jam we did at the end (Untitled)… Enjoy

“Back and Forth” by Minko
King Harry Ferry Artist Residencies

In the summer I was enlisted as the sound artist for the King Harry art residencies. The King Harry passage is a stunning tranquil spot on the River Fal in Cornwall, where people can be ferried across the river in their cars, rather than driving all around the peninsula.

In this sound piece, I explored the daily aural environment of the ferrymen on the King Harry Ferry. Whilst the surrounding landscape is breathtakingly still and beautiful and the river banks lush with bursting broccoli shaped trees, the ferry itself is a busy bustling vessel moving cars and people to and fro across the River Fal, morning to night. The chains clank, the cars rattle, metal gates crash and voices travel constantly on the wind.

I treated the ferry as a large instrument. I listened to the sounds and noises coming from the ferry, and around it, and I also explored the other potential sounds within its large metal structure using drumsticks, beaters and my hands to “play” it. My recordings brought up some interesting responses, one principal and recurring question being, “at what point does sound become music?”

I found that certain repetitive rhythms such as the huge chain slowly moving as it heaves the ferry along and the oyster catchers steadily throwing their full nets from person to person, led me away from the action into a more musical frame of mind, and the musician in me was driven to look for melodies to accompany them. However I also encountered sounds with a different quality, a more linear feel. These sounds such as the ferrymen talking, the engine running, breathed a narrative that sat me in the present moment and carried me forward with them towards a place in the future. These sounds engaged my intellect and my curiosity. It made me think about how differently we react to sounds, and what they lead us to. There is something about a rhythm or a melody that transports you away from the present moment into a universal timeless plane. Whereas the sound of life going on seems to keep you in a story telling space and binds you to the specific. It asks you to listen to what is happening. The melodies and rhythms by contrast distracted me and propelled me into my dream-filled world.

I am not talking specifically about the debate on what is considered to be music, or accepted as music, an exciting ever-evolving subject that musicians must constantly challenge and has undergone rigorous speculation in the last century in particular with experimentalists such as John Cage, Edgar Varese, John Coltrane, The Art Ensemble of Chicago and the hundreds of others that have followed. The boundaries between noise and music are constantly shifting as more and more found sounds are incorporated into compositions to challenge established musical ideas. The ear adjusts and the noise metamorphoses into melody. Dissonance starts to change into consonance. But working on my piece I became interested in the physical shift when sound moves our focus from the narrative to the abstract, from the specific to the universal. When recording the ferrymen talking I felt a different experience from to hearing the oyster catchers whose rhythm lulled me into a more timeless reality. It seemed to only take a few repetitions to remove me from the scene and the real time unfolding.


My final piece explores these questions by moving between these two experiences, and travels back and forth between the two banks; the song and the soundscape, poetry and prose…
The piece will be played on the King Harry Ferry this summer.
You can download it here 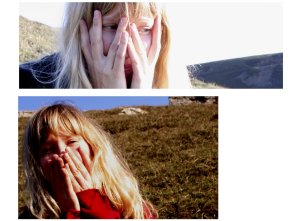 A new radio station, Source FM 96.1, was recently launched for Falmouth and Penryn and on Wednesdays at 7pm you can tune into a Orpheus’ Baubles, a new hour long show run by Tom and Simon that features a local musician each week. Last Wednesday, 25 March, I was asked to be their ‘focused’ artist.

For the show I was asked to choose two of my own songs for them to play as well as four pieces of music that have been a source of inspiration in some way. Tom and Simon then also selected four songs each that they feel hold some affinity to my songs. They made some great choices, such as ‘Sing of Bliss’ by The Khalsa String Band, ‘Afraid’ by Nico and ‘Credit in The Straight World’ by The Young Marble Giants. Narrowing down to four songs that have touched me was quite a challenge but this was my selection…

Sybille Baier’s beautiful one-off album, Colour Green is an intensely intimate collection of folk songs charting the break up of a love affair and written after a road trip across the alps with a friend. The album was recorded at home between 1970 and 1973 on a reel-to-reel tape recorder. What I love about this album is that you can almost hear her sitting at a kitchen table, a log fire burning and the fresh dark green alpine hills outside. This is very much down to the way she recorded herself so close up to the microphone in order to reveal her fragile feelings and It is recordings like this that inspire to record my own music.

Keith Jarrett is an artist I discovered when I was 16 and started studying jazz piano. My teacher taught me no piano for the first year and just played me records which was annoying at the time but the plus side was a slow and intense discovery of many incredible jazz musicians, a highlight of which was The Koln Concert, a solo live improvisation from 1975. His lengthy solo improvisational explorations meander effortlessly through classical, jazz, blues and gospel, and he poignantly intersperses the darker classical phrases with light sparks of jazz, making the fall back to the minor keys all the more painful and powerful. The Koln Concert in particular is a piece of music that turns my stomach inside out. I use keys in most of my songs, sometimes piano, occasionally a Rhodes, or an organ, and Keith Jarrett’s mastery of bitter sweetness is a constant influence in the shape of these compositions.

I chose Serge Gainsbourg because as a child my parents played mainly Polish Folk Music, Elgar’s Enigma Variations and a host of French chansonnieurs including amongst others Serge Gainsbourg, Brigitte Fontaine, Francoise Hardy and Boris Vian. The French artists still inspire me and I think its because the French have an art of combining existentialism and humour in the same beat with a result of giving their songs a unique unconventional flavour, that always makes me want to go and write something new and curious, and often playful.

My final choice was a song by Armando Trovaioli written for the film Incontro Informale made in 1968. I have recently been listening to lots of 1960s Italian psychedelic soundtracks, including Ennio Morricone and Stelvio Cipriani. I love the freeness in the psychedelic surreal feeling typical of soundtracks to many of these trashy movies. And its more than lounge, more ‘knowing’ than lounge music which doesnt really stir me at all. The female vocals in this particular song ooze eccentricity and knowingness.
Anyway I hope you enjoy the show….