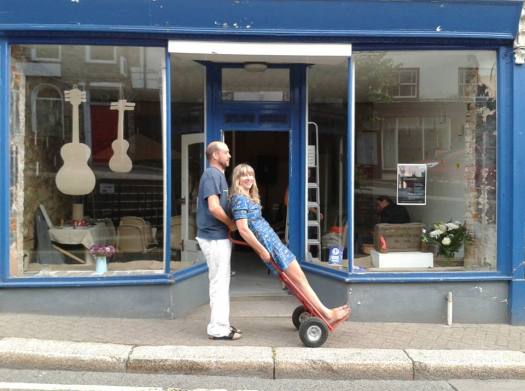 My EP launch took place in Jo Kehyaian’s studio in Penryn which is a former launderette slowly being morphed into an art studio. However there is no electricity there yet so I decided to put on a candlelit performance.  Jo is an artist working in a variety of media but tonight she was sculptress extraordinaire and transformed 40 spoons into beautiful wall mounted candle holders that filled the room with a warm glow and created a lovely haven away from the summer rain. Jo herself has written a piece about the evening which you can read on her blog here. 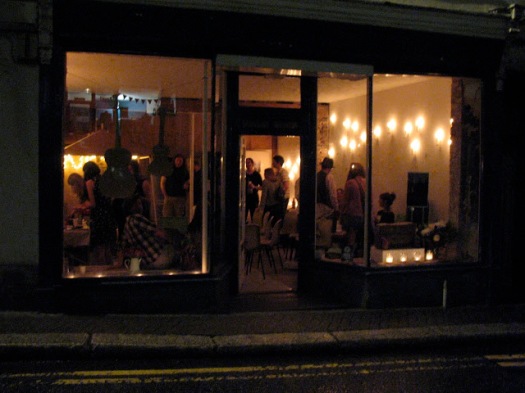 The other day I received a lovely review in my inbox by Mark Barton who is the former editor of legendary music magazine Losing Today. It hasn’t been published yet but here is a sneak preview….

“Inquisitive fools that we are we ventured a little deeper in to sound cloud world to be greeted by this woozy slice of dream drifting airy folk loveliness. Minko hails from Cornwall and has just released the second chapter in what she refers to as her ’song series’ an apparent trawl through an archive of acoustic gems numbering over 50 and counting. Having relocated from London to Cornwall and no doubt inspired by the serene scenery Minko put away her samples and electronic equipment instead opting for something more natural and acoustically spurred, as a result she’s been garnering quiet praise from the likes of the lilac times’ nick duffy who as it happens guested on a cut called ‘creature’ recorded live with Pulp’s Steven Haven hand (now made available on ‘songs 5-8 – creature’ – see links below). For our part we managed to hook up to a sound cloud extract showcasing her first release ‘songs 1 – 4 – Sybil of Delphi’ – a beautiful thing it is to for Mi nko blends French chanteuse pop through a myriad of dream woven soft psych centred folk mirages, wistfully pastoral and lightly crushed with a becoming sensitivity that’s lilts with a distinctly alluring faraway framing which to these ears at least fixes like a spectral Serge meets Komeda cutie.”